If you’re anything like me, you’ll often keep the same browser open for days or even weeks and accumulate a lot of tabs!  Is your Google Chrome address bar slow?

Recently the omnibox in Google Chrome, the address bar from which you can search amongst other things, had been getting unbearably slow.   Sometimes it would take seconds for it to respond to keystrokes.  All other keystrokes within actual pages were responsive and quick.   After a closing Chrome and re-opening, the omnibox would function snappily again for a few hours until it slowed to a crawl once more.

Having hunted across various forums and seen suggestions with a varying degree of difficulty/upheaval I eventually came across a simple solution to my specific issue.  I was running Chrome in Windows 7 Compatibility mode as when I first got a somewhat bleeding-edge version of Windows 8, I had some issues getting Chrome to work properly.  I think that the Chrome developers have now ironed out any inconsistencies and thus no more compatibility mode is necessary. 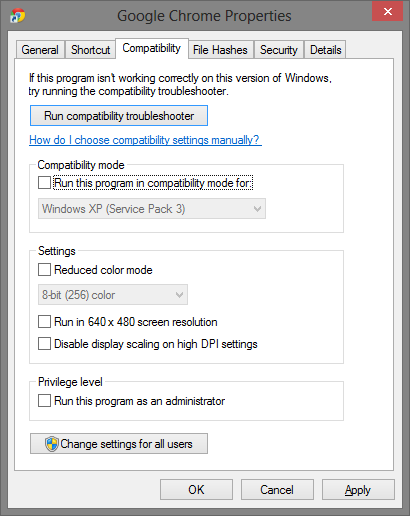 Since turning off the compatibility mode for Google Chrome, the omnibox has been beautifully responsive and I can save myself the schlepp of closing in the middle of workflow just to get the address bar back!

If yours is doing the same, it is worth checking if this fixes it for you too.

Going to the Chrome short-cut on your desktop, Right-click->Properties then select the “Compatibility” tab and make sure that Compatibility is unchecked, restart Chrome and you should be back to a quick and nimble omnibox!

Tim Meyer suggested another tip which may help:

Tim recommends that this be done periodically to prevent omnibox slowing down too much.
This will remove all your cache and therefore slow down the reloading of previously visited sites.

More information about the file location and its purpose can be found here and here.